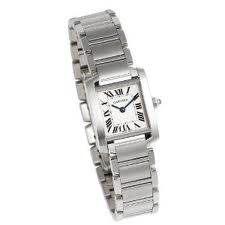 When I can’t find something I’m missing my first thought is not that it’s lost. The thought is “It’s got to be around here somewhere.”

“It’s probably in my other bag”. That’s the universe punishing me for changing bags in the first place. Who cares if I carry a brown bag when wearing colors that look terrible

“I must have put it in a jacket pocket”.  If I didn’t change jackets so often this would not be a problem.

“It probably rolled under the car seat.” No comment about my making turns sharp enough to cause the projection of objects from seat to floor.

But when my wrist watch was missing for almost two weeks and turned up in none of the old familiar places I began to worry.

I have been wearing that watch every day for about fifteen years and I like the times it has brought me.

Fashion has changed since its purchase. Hemlines have advanced and retreated, stockings patterned, sheer and opaque and hairstyles gone from curly to straight, long to short. But my watch has stayed its old reliable self.

I finally had to admit that it was lost. It wasn’t simply misplaced, absent mindedly put somewhere or propelled off a car seat. It has left the premises.

Suddenly the answer came crashing to my awareness: the pool locker room. As part of my physical therapy program I go to Morristown Medical Center’s therapeutic pool. The pool is four feet deep at its deepest and maintains a temperature of 96 degrees. A heavenly way to run through the sets of exercises taught by the physical therapists. Could I have left the watch in the locker with my street clothes?

After pool exercising, showering and dressing I pulled a chair over, climbed up and examined the shelves of each locker. Gum wrappers, hair clips and empty paper cups, but no watch.

Next thought: the lost and found. That sounded so elementary school: The Lost and Found. But there really is one near the security desk in the hospital lobby. Just to assure myself that I had tried everything before I declared the watch gone forever, I took the elevator down to the ground floor and spoke to the two officers on duty.

Officer Joe O’Brian  listened to my story attentively and brought Officer Darren Youker in from the office to speak to me. Uh Oh: am I going to be handcuffed and arrested for being careless with valuable possessions?

Officer Youker asked me some questions. “What kind of numbers were on the face of the watch? Standard numbers or Roman numerals? I’ve worn this watch for fifteen years. Did I never notice or have I noticed and forgotten?  If you find my watch I promise to be more observant next time. “Please describe the watch.” “It wasn’t a wind up watch; it was automatic and had a metal bracelet.” What’s the proper term for that automatic style?  “Do you know the brand?” “Yes; it was a Cartier.”

“Just a moment.” he said, and went back into the security office. He came out with a small bagged object, and in the wrapping was my watch! “One of the therapists found it in a locker.” I couldn’t believe that honesty is still alive and well.

These are stories we rarely hear among the terrible news forced upon us every day. The therapist, Jamie Cozine, was paged and interrupted from her lunch in the cafeteria to come to the security desk so I could thank her face to face. How many people would return a Cartier watch? Jamie’s only thought was “It was the right thing to do.”

So I enter the holiday season with hope for the goodness of people and the knowledge that there are honest, sincere ones all around us. Thank you, officers O’Brian and Youker, and thank you, Jamie Cozine.

And Happy Holidays to all.