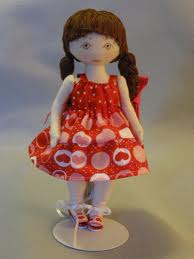 As a child my favorite book was the adventures of Poppy.  Poppy was a doll who miraculously came to life, becoming a tiny girl about 8 inches tall. She became a loving and caring companion to the young heroine of the story, who coincidently, was just my age.

How this idea captivated me; the thought of having such a special, unusual friend. The idea captured my imagination, and I wished I could have a “Poppy” too. I made wishes on “The first star I see tonight,” wishes on wishbones and wishes on top of the first two wishes.

How great it would be to have a little Poppy. I could have such a good time making things for her: a little bed out of a matchbook case, tiny pillows from scraps of fabric and miniature blankets out of bits of wool.

She could eat a Cheerio or two for breakfast with an eye dropper full of milk, a sandwich I would make for her, constructed of two cornflakes with a peanut butter and grape jam filling for lunch, and a postage sized pizza for dinner.

I could use maple tree seed pods (which we used to call “Polly noses”) as spoons, and find all sorts of ways to fashion ordinary objects into useful tools for an 8 inch person. And she could come everywhere with me. She would be very comfortable in my fanny pack.

I never did figure out how to get a real life “Poppy” of my own, but I found the next best thing.

We all know that monkeys are the closest relatives to humans, right?

I discovered a monkey so small that it is called a “finger monkey.” Full grown, it fits into a human hand and hangs onto a finger with it’s paws.

These monkeys are the tiniest living primates in the world.

Will they be  available as pets some day? Will they be able to acclimate to our climate after living in the rain forests of South America? Could they be trained, housetrained, and no-bite trained? I don’t know, but now I can dream of another small creature to  nurture, teach and befriend.

I can just see him, swinging from lampshades, scurrying into the pantry seeking snacks, and commandeering a pot holder for his bed.

He’d probably learn to do cartwheels and somersaults. All the neighborhood children would line up to see him. He’d be a bigger hit than Clifford the Big Red Dog. A greater hero than Rin Tin Tin. More curious and smarter than Curious George.

There’s no end to the projects we could plan. When can I have a finger monkey?