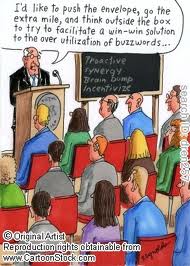 It has nothing to do with my training as a speech pathologist. There is a particular pattern, that when I hear it, makes me bridle with impatience. I call it the “Back and Forth” pattern. It is the verbal equivalent of giving something with one hand and taking it back with the other.

That’s what happens when a speaker starts telling you something, then interrupts himself to go backwards to justify his position. Something like this:

“The child in front of us on the plane wouldn’t stop crying and screaming. I felt like getting out of my seat and giving him a…..Not that I believe in striking children. I never even lifted a finger to any of mine when they were little; I would never hit a child.”

“They asked me to serve on the School Board next term. I hate working on any kind of committees: the pettiness that comes out at those meetings….Not that I don’t want to help in any way I can, because I think they do a stand up job. And of course I’m flattered to be asked, but…”

“We’re very good friends of the Johnson’s, and we love their family to death. But their taste in restaurants is horrible…Not that every place we go to dinner at has to be a formal, expensive place, but…

Can anybody make a statement, take a position on an issue, and let it stand as is without having to explain their point of view?

And by the way, I hate the expression “I love them to death.”  What kind of mixed language is that? Not that I want to criticize anybody’s right to express themselves in any way they choose. Everyone who knows me knows I am a passionate supporter of Freedom of Speech.

“Back and Forth” is only one of many irritating speech patterns I hear. Please tell me you share my dislike of the expression “To tell you the truth” every time your friend expresses an idea?

How about starting a sentence with “Frankly…” Must you be told that they really mean what they’re about to say? Should you assume they are lying unless they tell you that THIS time they are telling the truth? And if they don’t start with “Frankly” does that mean you should suspect everything else they say? Anyway, nobody says it more charmingly or unforgettably than Clark Gable did in “Gone WIth the Wind,” when he told Scarlett O’Hara, “Frankly, my dear, I don’t give a damn!” I believe Clark Gable with or without the “Frankly.”

The first time someone said to me, “You know what I mean?” I thought it was a real question and assured them that yes, I knew what they meant. But after they said it a few dozen more times in the course of a paragraph I realized that I was  listening to a habit, not a question.

An earwig is what we call a song that plays unceasingly in your mind. So what should we call expressions people use that are just as annoying as a song you can’t get out of your head?

THE POWER OF SUGGESTION