I read an article in the April 4th issue of the New York Times describing a Brooklyn man’s hobby; one that has faded in popularity over the years. The most famous person to publicize this hobby was Marlon Brando in the 1954 academy award winning film, “On the Waterfront.” He played the part of a longshoreman and was a rooftop pigeon breeder.

I hadn’t thought about it in many years, but when I was a child in Queens, I had a cousin in Brooklyn who raised pigeons. He owned a coop on the roof of his apartment building and was their solo caregiver and trainer. He built the coop himself, and it was a bona fide bird coop. I, as a sophisticated, knowledgable ten year old suburbanite, recognized a real bird coop when I saw one. 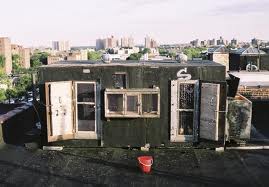 Where did these birds come from? How did they become members of my cousin’s flock? Was this hobby like having a herd of sheep, a swarm of bees or a gaggle of geese? What makes a group of creatures become attracted to a place and live there as a team? Do they sign long term leases? Do they arrange pre-nuptial agreements to remain together forever? Or agree to long-term contracts rewarding them for remaining in one place?

It was magical the way he would signal the birds to leave their coop, swoop into the air, fly freely around, and then all come back making one dramatic mission statement at the mere sound of his gym teacher-style whistle.

Each pigeon wore a tiny bracelet on its leg identifying it and giving its address. Why, I don’t know. Were there pigeon police? Did the city set up a watchful sheriff’s office with winged deputies to keep the birds in line? What kind of line: a clothes line, chorus line or line veto? Were there citizen vigilantees roaming in search of under-age truant pigeons?

I still wonder how one goes about training a bird or a group of birds to leave their cozy nesting areas and fly to freedom, totally without restraints and without anything keeping them from flying off forever.

Why would a group of pigeons come home to a dingy rooftop in Brooklyn when they could hop a flight to glamorous Costa Rica or exotic Portugal and enjoy the great weather? Aren’t they curious about what pigeon senoritas are like in other countries? Don’t they have any curiosity about different foods? Perhaps pepitas instead of peanuts? And rather than swilling dirty water puddles on Brooklyn’s drab cold rooftops wouldn’t they prefer sipping sangria on sunny shores?

So many questions; so few answers. No one has yet learned to crack the code of the pigeon mind.

I SHOULD HAVE SAID…