Considering picking up today’s newspaper from the driveway makes me wonder; Do I really want to start a perfectly good sunshiny day with more tales of horror, war and trauma around the world? Why bother, when I have traumas of my own on which to ponder if I’m in a horror story state of mind.

Like the time, at age six, I was stranded on a New York subway train, alone with my four year old brother. 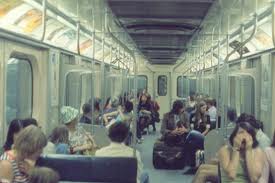 The three of us, Jerry, our mother and I were going off on an outing together. Riding the subway was an exciting activity when I was a child, and we set upon our adventure with great expectations for the afternoon. Mom amused us by pointing out the colorful advertisements papering the areas above the subway doors just under the ceilings. “Vote for Miss Ballentine,” accompanied by six photographs of lovely young women all hoping for the spectacular opportunity to be Miss Ballentine for the coming year. That ad was the most enduring in my memory, even before I had any idea that Ballentine was a brand of beer. The Miss Ballentine contest was a subject of serious consideration and discussion.

We rode along on the bumpy, swerving subway car stop after stop, enjoying the sights of the new passengers arriving at each stop carrying all manner of cargo: shopping bags from now-gone stores like Alexanders, Macys and B. Altman, cargo carriers with small kittens hiding inside the little barred windows, or fragrant shopping bags filled with freshly made hunger inducing raviolis and meatballs.

As we became lost in our own reveries and day dreams the ride took on a dreamy quality. Maybe that’s why, when Mom get up to exit the train we were oblivious. While she assumed her two little chickadees were following behind, we were lost in our own thoughts and didn’t notice her leaving. Until the banging on the windows and screeching at the door brought us to the reality that we were inside the train and she was out on the platform, crying and screaming for us. But it was too late; the doors had closed, and Jerry and I were alone in the foreign country of a moving subway car.

Then a kind older woman approached us (the older woman was probably about 25!) and told us not to be frightened; she would help us. She herded us off the train at the next stop, we went up the stairs and over to the other side, caught the next train coming in the opposite direction and got on. When we arrived at the previous station there was Mom, talking, crying, gesturing to a transit policeman. What a look of relief and joy came over her as we were reunited.

And the kind gentle woman disappeared back on the subway train and rode off to her intended destination.