Here we are in a 1951 Pontiac convertible in Havana, Cuba. Our trip there was educational, interesting and sad all at once. Tourists may visit Cuba only in groups: not on their own. The people are sweet and friendly. But they are poor and live in tiny houses, often three generations living together. Here are some of the facts I learned:

The Cuban government owns everything. The people are employees of the government, which sets the pay scale for every category of jobs.

Everyone receives free medical care, free education and food rations which cover three weeks of food. Anything else, including food for the remaining week of the month, must be provided by the family members in whatever way they can manage.

There is no advertising in Cuba. If someone is looking for a job he must either listen to word of mouth or go in person from one place to another in search of work.

Much of their needs are provided by relatives who live in the United States. Often, parts needed for mechanical tools are made and improvised by the workers.

Music is everywhere: in restaurants, street corners and parks.

I was surprised by the number of “classic cars” all over the city. I thought only a few were preserved for display, but in actuality those old cars are the every day transportation for many people. New cars are not seen. Public busses are used by most Cubans. Hitch hiking is safe and is encouraged. If a person driving a car passes a pedestrian requesting a ride, he is encouraged to stop and give him a ride. If a government official passes a pedestrian on a highway he must stop and pick him up.

There are two currencies: the peso for the working people and the CUCs for tourists and wealthy Cubans.

Educationally, it is against the law to drop out of school; it is mandatory to attend school through high school. Text books are provided, but must be returned at the end of the semester. No private schools exist in Cuba. Three exams are taken to qualify for admission to college: Math, History and Spanish. Eighty percent of the population attends college.

After graduation there is a two year mandatory military service required. Afterwards each student is assigned to Social Service: three years for girls and two for boys.

Abortion is legal! Pregnant women work seven months before maternity leave begins, and returns to work in one year. In all this time she is given her full salary.

As we drove through the countryside I was astonished and saddened at seeing the terrible nutrition of the animals. Horses were tethered to wooden stakes in the ground tied to five or six feet of rope. The paltry grass in that small circumference was their meal each day. They were so thin that their ribs poked out of their bellies. Dogs were malnourished as well. I did not see any cats. Oxen are still used to plow fields, pulling hand plows with farmers steering behind.

We attempted to engage the tour guide in a conversation about the missile crisis of the 1960s. She insisted Cuba had only defensive missiles, and when we challenged her, she snapped back with “Well, we all have our own opinions!” End of discussion.

Everyone we spoke to expressed hope that the embargo will be lifted soon.

…and so the drama continues. 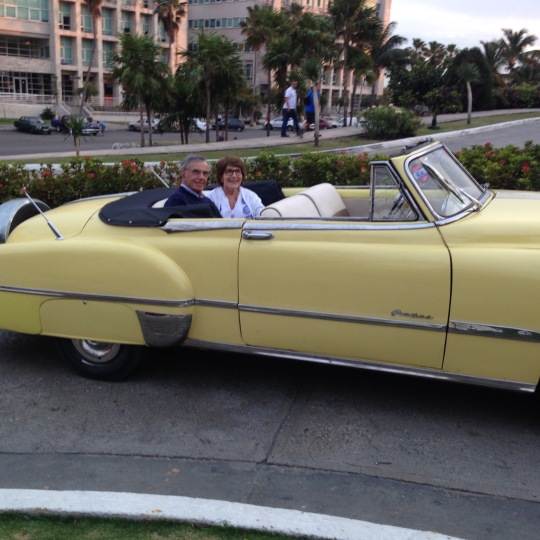 A WEEKEND IN THE BIG, BAD CITY