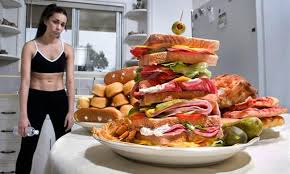 Have you ever eaten with someone who, after the meal is complete, and you ate everything on your plate, says with great enthusiasm,”You Were Hungry!”

“That was a totally unsolicited and unwanted observation of the amount of food I consumed. The comment surprised me. I felt as if I were being observed and evaluated for how much I ate. And who likes to be judged?

I interpret the comment as an insulting one; it gives the impression that the person with you thinks you ate too much. Hearing that remark addressed to me made me self-conscious. It never occurred to me to pay attention to how much anyone else ate at a meal. So why is the amount of my food intake being observed, judged and evaluated?

When I mentioned my feeling of being insulted to a friend she said,

“Oh no. That is not an insult; My mother was from Italy. In Italy it means that the hostess is pleased that you, enjoyed the food and were happy with the meal“

a compliment. You might have been hungry when you started eating, but now you are happily satisfied. And the fact that you ate everything the hostess served is a compliment to her and her cooking.

A third interpretation of that comment is, “I’m glad you were not wasteful with food. It is not a commodity that anyone should take for granted, seeing the hunger in this community and around the world.” So when a person says “You were hungry,” it simply is confirming that you were appreciative of that meal.

So the comment“You were hungry”doesn’t mean what you assumed it did.Maybe. But still I wonder, “Does he think I’m getting fat?