ISIS OF THE SEA

With all the violence, illness and sadness in the world, the bright rainbow seems to be taking a sabbatical.

“I can’t read the newspapers any more.”

“I won’t turn on the TV news these days.”

“I’d rather listen to a Book on Tape than listen to the radio,” are comments I hear everywhere.

The Ostrich Effect is alive and well; if I hide, it must not be happening. If it is happening I won’t know about it and don’t have to watch it unfold, one ugly incident at a time.

But attitudes change when anyone enters our house. Our home is tranquil; the peaceful sights of salt water fish tanks assure the calm of life on earth. Whether a serviceperson, a friend or a deliveryman stops by, not a person comes in without approaching the tank in awe. “Oh, they say. This is so beautiful. So peaceful. If I lived here I would sit and watch the fish all day. It’s therapeutic. So relaxing.”

Really? These words, universal to my ear, are spoken by tourists, who see only external factors and haven’t the slightest idea of what this hobby is really all about. Here is one small example.

This afternoon my husband, Harvey, was troubled because his clown fish were attacking his red hawk fish. 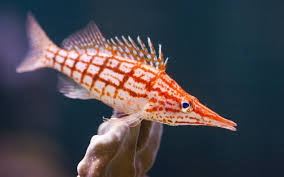 Clownfish, cute as they may be, are fiercely territorial, and any critter with fins and a tail had better not swim anywhere near their self-claimed backyard. Or front yard. Or underwater yard.

The fish Harvey has are more rare than the orange and white wiggly swimmers who endeared themselves to the public. Our clownfish have the striped markings of their cousins but are white and chocolate brown rather than white and orange. 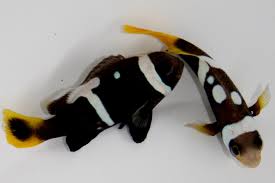 They’re called “Designer Clownfish.” Their behavior suits their elite status. It is not relaxing to watch two fishy bullies attack a tank mate who gets too close for their clown sensitivities.

So, listening to the advice of the owner of the “Absolutely Fish” store, Harvey drove down to Clifton, NJ, to buy a pair of Damsel fish to distract the bossy clowns and keep the hawk fish safe. With great anticipation he made the round trip, acclimated the new fish for a half hour in an incubation tank and haltingly put one into the tank at a time.

Did they attract the clowns? Did they distract them? Did they repel them? Hah!

All they did was provide more small fish upon whom the clowns could assert their leadership and show the newcomers exactly who was boss of the tank. They went after the small damselfish

immediately, chasing them under the coral coves and out of sight. Watching the attack was unquestionably neither peaceful, relaxing or pleasant. Now not only is there bad news in the papers, on television, and on the radio.

Now there’s bad news in the incorrectly assumed peaceful tanks somewhere in Morristown, NJ. Civil war is going on even as we speak. I call the salt water fish tanks “The Isis of the Sea.” Brutality knows no boundaries, on earth or in the ocean.