And your address book. Reading your address book is a trip through the stages of your life. The memories aroused when you read names of past contacts awaken all kinds of feelings. Coming across a name, address and number brings back memories. An address book is a grand party of memories linked together in alphabetical order. One friend whose name I found caused me to think,

“I remember the times we’d speak while we watched the children play. We opened our hearts to each other and spoke in uncensored ways that revealed our innocence and trust way back then. Life has taught us not to be so free with our secrets. Life has frightened us to trust. That freedom will never happen again. Now thoughts and feelings are shared with groups, such as the reading group, where discussions of authors’ work bring us to express our own. We reveal our emotions through the writings of others.

Rewriting the address book requires tests of loyalty, persistence and a little bit of pragmatic sadism. Have you changed your address book since phone numbers consisted of names and numbers, as in Butterfield 8-2000? Since party lines disappeared? Since telephones were connected to wall outlets?

Divorces wreck address books. They do one of two things to your book: remove one contact, or add one more. Retirement changes addresses, towns and states, making your list obsolete. Death is a permanent status, and keeping the departed’s contact information can be  misleading.

This is all too complicated. I’ll just order some additional blank pages and keep everyone where they should be and always were, if only in my memory. 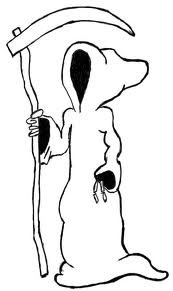 I have the greatest protest of all. And I will take it straight to the top. My Dad always taught me to go to the Top. “Contact the decision maker. The person in charge. The CEO.”

But is there one? Who is it? Google is no help finding the answer.

This is not a philosophical or a religious discussion, but I have an issue with the Death Decider.

“Death Decider, why are all the funniest people disappearing into the great beyond?”

Your latest cruel act, DD, was just last week. How could anyone kill off Maurice Sendak? This is not a Season Finale of a soap opera. This is real life. You can’t kill off a clever, wonderful writer and artist and expect his fans to accept that. I loved his book, “Where the Wild Things Are,” and still recite ,”going once, going twice, going chicken soup and rice” from another of his books, “Chicken Soup and Rice.”

Where can I protest this action? I was not consulted. It’s just like TV Ratings; who says one show is a hit and another a flop? Were you ever asked your opinion of what shows you watch? I was not. Nobody ever asked me. Don’t I count for anything besides deciding where my money can earn more than .13%?

Remember Al Hirshfield? He was my special delight; a man five months short of 100 years old, who drew theater cartoons for The New York Times. He always secretly included his daughter, Nina’s name somewhere within the cartoon. That was a ritual every Sunday. I grew up searching for “Nina” while loving his drawings.

And how could they let Charles Schultz off the hook? Or did they lower the hook? Maybe they just lowered the boom.

Charlie Brown, Peanuts, Snoopy and Lucy; we love these characters. There should be a law against eliminating people who make us laugh. The world needs more laughter. We need these laugh sponsors.

So join me. Write in. March.

Before it’s too late.

Maurice Sendak’s 1963 “Where the Wild Things Are” unlocked a scary, psychologically nuanced, inner world long taboo in mainstream children’s books. Mr. Sendak once told me that King Kong was a great character and had influenced him when he created “Wild Things.”

“You’re supposed to be frightened of these things. Kids need Kongs to help them conquer their anxiety,” he said.

Maybe “Wild Things” is not your particular inspirational tipping point. Mr. Sendak’s 1970 “In the Night Kitchen” also spooked a generation of readers. Mickey, the naked 3-year-old protagonist, and the whorl of sexual innuendos that floated around him, were shocking in their day. And, if Mr. Sendak’s work, in general, conjured demons, “In the Night Kitchen” kindly presented a way of using imagination to conquer them.

The artists and designers here are direct beneficiaries of Mr. Sendak’s genius. He revolutionized narrative and conceptual illustration through the way he interpreted his own influences; he drew from the past to illuminate the present.

“Night Kitchen,” his stylistic homage to the comics artist Winsor McCay (who created “Little Nemo in Slumberland”), is a mash-up of comic strip hilarity, expressionist and surrealist absurdity, and has inspired illustrators to revive passé styles and to use them as foundations for new ones. Mr. Sendak’s agility with sly pictorial autobiography encouraged illustrators to inject personal symbolism into otherwise depersonalized commercial art.

Mr. Sendak was not the only illustrator to explore these recesses. But he opened a rich vein of possibilities for other artists whom he inspired, and who created their own symbolic visual languages, with which they could tell two or more stories at once — one for the public, the other for the self.

“Wild Things” and “Night Kitchen” exemplify Mr. Sendak’s skill at bifurcation. He often objected to being called a children’s book illustrator, despite his success at it. His heroes were not children’s favorites, but rather Mozart and Melville. One of his proudest illustration jobs was Melville’s “Pierre: or, the Ambiguities,” a truly inspiring suite of 30 drawings that, on the scale of memorable images, is as weighty as his most important books. Probably there’s not a child who has ever seen it.